Rogues I have known (and loved) I met Phil in the very early days of my magazine biz, because he was The Man who ran immedia! His Australasian Music Industry Directory was in those glory days of print, the most stolen publication in the biz. At $25 a pop, it appeared twice a year with 300 pages of who is who, and at its peak 300 grand worth of advertising.

Everyone knew this, because Phil told them so.

He was an invaluable advisor to me, sometimes spectacularly, especially when Noel Crabbe tried to sue me in the Supreme Court over some incorrectness I published about his dodgy On The Street rag. Phil was right on the money: ‘Don’t hire a lawyer’, he smoothly intoned in his southern US accent. ‘Engage the other side, call up and talk at the lawyer. A lot. Write a lot of letters. Do your own appearances for the directions and listing hearings. Wear them down!’

He was right, of course, and Crabbe crabbed off to sue someone else.

Phil kind of ran out of mojo, and retired to Coffs. Beforehand, he waged various wars and always in sequence. Many music industry types loathed him, and he never cared. He pulled a massive clanger on Glenn Wheatley which most people thionk went too far by half. I was uneasy about it. I always enjoyed my updates, and vowed to learn from Phil but not be like him. And I really did/do like him!

I want to go back to Rudi’s restaurant; Stuyvesants House in Crows Nest Sydney. Because I miss the dysfunctional floorshow, through some undiagnosed flaw in my values system. I miss the food from Max, with his trademark smoker aroma, pictured (minus the aroma) here: 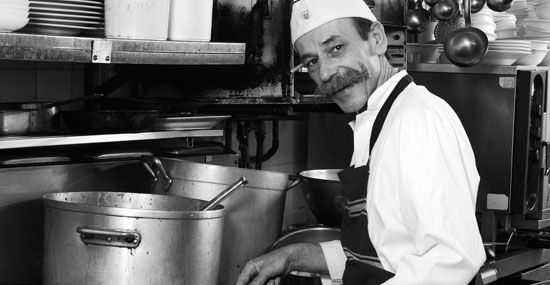 Rudi takes no prisoners. These guys are seriously hard core.

My breaking straw event is detailed below. Here is Rudi with his apparently terrific son.

The deal breaker was that I had myself thrown out before Christmas 2011, as I could not abide by how Rudi treated another novice waitress. (Story here).

How about Eric Robinson?

Since the early 1970’s one of the two dominant partners in Jands, and probably the toughest guy from the slug it out era of the 70’s and 80’s. He has always driven the concert audio side of the company, and needed to be aggressive and driven to get to the top.

Which is where he remains to this day. The stories about Eric are legion – one that sounds credible is when Samuelsons UK purchased the Jands Concert Productions business in the late 1980’s for a reported seven million dollars. Eric flew over to London to head up operations, and upon arriving happened upon a vintage Rolls Royce in the warehouse.

‘Get that thing out of here’, he is reported as saying, although the language was inevitably more colourful. Transpires the car belonged to the Chairman, and relationships deteriorated over the next few years. Another time an old school type reportedly sneered that ‘you Australians are all convicts’, whereas Eric quickly replied ‘yes, and you sent us here’. 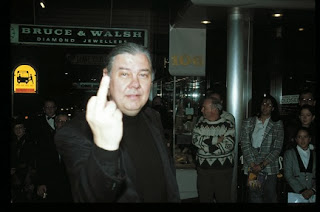 He hasn’t been pictured anywhere we know of, other than this from the 1990’s. At the most recent Australian Road Crew Reunion in Sydney Eric attended, and the jokes flew thick and fast since at least half the people in the room had been fired by him at some stage.

Eric has a very fast wit, and his deal making skills are almost the best there are…..

Now with Meyer Sound, but formerly Lightshow entrepreneur and all round sanest mad guy in the room. Steve has a fantastic history of craziness, once pulled a knife on a company director at his own product function; and has almost done as many drugs as Keith Richards.

I’ve been on the wrong end of a Steve Devine feud, done business with him for forty years, and like almost everyone in the audio biz I love him to pieces. Brilliant brain, funny as anything, and a real family man with almost as many families as I’ve had, scattered all over.

Now kept in check by Louise, who somehow tamed the beast.

One of the most complicated yet joyful people in the broadcast industry, universally a polarizing figure, with one of those brains that can do anything it attempts – provided the attempt is actually made. I’ve known him for quote a while, in many roles.

Of late we’ve been disconnected due to some politic or another, yet I really enjoy his company. Our relationship was sorely tested when we flew to Vegas together in 2012 – the story is here.

* I’ll add more ROGUES as they come to mind!