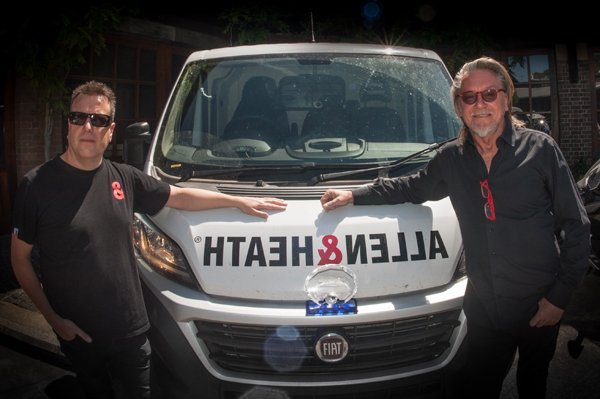 Pic: Andrew Crawford and Stephen Bray with their ‘Distributor of the Year’ award, and the Ampervan

When two young engineering students established Allen & Heath in the corner of a London factory, they could hardly have imagined that 50 years later, people from all over the world would gather to celebrate 50 years of continuous mixing innovation!

It was 1969, right around the time that Neil Armstrong first stepped onto the moon. Steve Batiste and Andy Bereza had established something of a reputation for their clever audio circuits, and were inundated by bands and companies asking them if they knew how to design and build various mixing devices. As a general rule they’d reply, “Of course,” and then set about trying to do it! The quadrophonic analogue console used by Pink Floyd in Pompeii was one example.

Following firmly in Batiste and Bereza’s footsteps, today’s Allen & Heath products are used and loved by bands, rental companies, installers, places of worship, DJs, clubs, broadcasters and studios in virtually every country across the globe.

The secret of Allen & Heath’s enduring success? “Excitement,” says Managing Director, Rob Clark. “We’re excited to be sharing in our customers’ ambitions, and by the technologies that will help them to achieve those ambitions – that’s what keeps us striving to innovate and improve.”

“It’s become a cliché to talk about listening to your customers, but that direct connection with the people whose hands are on the faders is absolutely essential, and I think it shows in all that we do. It’s inspiring to take stock of all we’ve achieved together in the past 50 years, but looking at the new developments in the pipeline, I can safely say that the best is yet to come.”

Stephen Bray and Andrew Crawford from Australian distributor TAG made the trip to celebrate with Allen & Heath. “Believe it or not, we’ve represented Allen & Heath in Australia for exactly half their history,” said Bray. “There’s been plenty of ups and downs, tectonic technology shifts and many memorable characters and moments, but through it all we’ve stayed close, made great friendships and I’d have to say the relationship is more solid today than it’s ever been.”

During the celebrations, Allen & Heath invited Andrew Crawford to present a segment on the adventures of TAG’s iconic Ampervan. “Who’d have thought a little Fiat van bumping around the Australian Outback with a big ampersand on its rear doors would attract global attention,” said Andrew. “Everyone loves it and during the formalities we surprised MD Rob Clarke by presenting him with a scale model Ampervan complete in A&H livery!”

Giving one back, Rob Clarke presented a delighted Bray and Crawford with the ‘Distributor of the Year’ award. “This is a huge honour for us and it’s a humbling experience to be here and receive this award among our international peers,” said Bray. “It’s fair to say we’d drive the Ampervan to the moon and back if Allen & Heath asked us to,” added Crawford.

[More on the Ampervan from July CX Mag here]