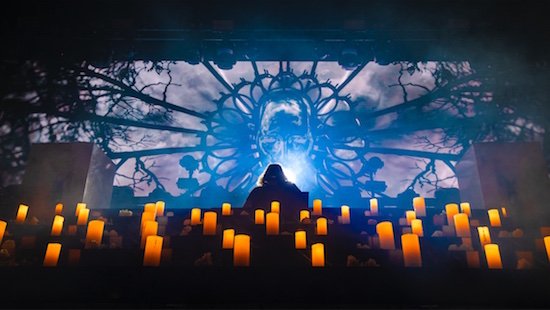 Australian deep house / dance DJ Tom Stell, known professionally as Golden Features, has been a regular on the dance touring circuit since 2014. Currently signed to Warner Bros. Records, he has just released his first album Sect and a tour of that name saw him perform live for the first time rather than DJ.

The crew on this tour clearly enjoyed every minute with FOH engineer Craig Gordon commenting,
“Everything about the show was great, especially the vibe of the crew, so it was a fun tour to be a part of. It was a really good production and they went all out which is kind of cool. Tom had a vision, he went for it, and I think it’ll pay out for him.” The tour utilised house PAs, although Melbourne’s Forum show was supplemented by some d&b B22 subs from JPJ Audio.

“We ended up with an Eighth Day Sound d&b rig for the Hordern show as we needed a bit more than the house V-Dosc system,” added Craig. “However, I’m pretty sure JPJ has since changed the house system to an L-Acoustics K2 so I’m pretty keen to get in and have a go on that.”

Eighth Day Sound supplied a touring control package that included an Avid Venue S6L with a Waves Soundgrid server. “It’s not as good as the Waves Card I had with The Presets. It’s not as easy to use and is a bit fiddly, but it does the job,” said Craig. “You can still use the plugins, which is cool.”

Outboard gear included a Puigchild compressor and also a Midas XL42 dual-channel microphone preamp and equalizer, which Craig used as an insert over the main mix buss.

“It’s only the parametric EQ I’m using, not the preamp which I normally use it for,” he explained. “For this act, I have the stems (drums, kick, bass, synth lines, vocal lines, Korg and Moog) as separate channels which I’ve mixed down to a stereo and treated it like a DJ at the end result. So the XL42 was inserted over that group and I used it like a parametric EQ, its great sounding and easy to grab when you need to act quickly. The XL42 is kind of a safety blanket for me.”

Craig used a couple of Waves C6 Multiband Compressors here and there to correct the top end a little, and as there were no live vocals, there were no effects required. James Luscombe looked after playback and monitors for the tour. Before he came onboard, the artist had already had a rig built by OCD Labs consisting of a stage box and an offstage rack. “We used Ableton Live 10 running into two Motus and then into an Orchid switcher for redundancy,” revealed James. “We used iConnect to do all of the MIDI. I’d say 90% of the show was all MIDI-controlled by the artist himself which was done by Ethernet between the two iConnect boxes.

“He had Akai MPD32 MIDI-over-USB performance pad controllers, a Novation MIDI controller, a Korg Minilogue and a Moog Sub 37 which was running into two Strymon effects pedals. Everything was MIDI controlled for things like preset changes so he was able to play those synths live along with his tracks.”

The artist also had a screen with HDMI running over Ethernet so he could see the session in front of him. Off stage, James had a second rig in case something failed onstage.

“Most of my work was done before the actual show so during the performance there was little for me to do other than monitor and potentially fix anything. It was all in Tom’s hands.”

Monitors, controlled by James on a DiGiCo SD11, were basically a couple of d&b subs with Tom wearing JH16v2 IEMs and using Shure PSM1000. Lighting designer Nicholas Beachen of Colourblind admits  that having just the one artist who stays in the same spot all night allows him much more creative freedom. He added that Tom’s style of dance music really allows him to not hold back with lighting and to go a little bit crazy.

“However when you have the one static artist, I find it’s difficult to make the stage look different from other DJs,” said Nicholas.

“I was really happy with the way this one turned out although at times it threatened to be too much. There’s a lot of stuff on stage but we managed to keep it clean looking.”

Lighting supply came from South West Solutions and video from Big Picture. The main design is a tiered riser with columns either side and 3D printed beetles as per the album logo.

Tom was keen to incorporate candles into the design and together with Nicholas, they tried a few options.

“At Field Day earlier in the year, we tried something that was 3D printed and quite cheap but it really didn’t look that great,” explained Nicholas. “Tom found a German company called Boogie Light for the candles which are really designed for an install environment rather than touring.

“They built the candles specifically, sent them over and we cabled them up and built control racks in Australia.”The candles, which are actually made of wax with a small LED chip inside, were re-positioned at each gig, held down by Velcro and controlled through the MA2.

“With Tom now playing live, we were able to program the lighting and video to timecode,” said Nicholas. “Coming into the record release, he wanted to spend a fair bit of time creating the live show, designing the set himself, which was built by Standby Go.”

GLP impression X4 Bar 20s form a line behind the artist and are also at the foot of the riser and winged trusses. “We’ve always used lights on an angle with Golden Features and it has become his look,” commented Nicholas.

“I wanted to use the X4 Bar 20s this time because they’re just great. Tom wanted a lot of light coming from the back and also the side of the stage. Pretty much every light in the rig is for crowd effects with just two MAC Auras and the one Ayrton Wildsun as a key light for the artist. “I sent a message to Matt Downs of SWS asking what he had in the way of a large face LED unit thinking maybe of an X4 XL and he sent me a screenshot of the Ayrton Wildsun. I was aware of the fixture but didn’t realise anyone in Australia had them, but Chameleon had six so Matt sub-hired one.

“I wasn’t 100% sure it would work well but it ended up looking great. I used it to light the artist and to sometimes strobe the crowd, as well as for effects. Tom really liked the light and so did we, it looked really nice in the shot behind him.”

As well as having Claypaky Sharpys, Nicholas had GLP GT-1 hybrid lights in his rig predominantly because Matt stocked them, but he found them to be an effective profile unit.“I drew the profiles as Martin MAC Vipers but was more than satisfied with the GLP GT-1, although there’s no other unit I would have liked to have,” he said.

“Mostly that was because of the gobos. I needed solid gobos rather than what would come in other products. I didn’t use many gobos but I specifically wanted a solid lines one.”

SWS added more Martin Atomic 3000 LED Strobes to their inventory for this tour with Nicholas saying they are the best and most powerful LED strobes on the market, in his opinion. Nitec 2-way blinders were also a key component in the rig. A pick’n’mix of smoke producing products ensured a heavy presence when required. The video tended to have a monochrome colour scheme and so matching colour with the lights was never an issue. Instead of concentrating on matching colours, Nicholas and video director Ken Weston could focus on how the video and lighting complimented each other in atmosphere and intensity.

“Most artists build the video and you have to work the lighting to it, so this was a nice change,” remarked Nicholas.

Control was fairly simple for lighting and video. Timecode came out of Tom’s setup and ran to FOH where it split to lighting and video. The video content playback was via Resolume triggered by timecode and VJd live, with an MA Lighting MA2 light, with a command wing as back up, to control lighting.

“My brief was ‘Forrest Occult’ so I let my imagination run wild, drawing inspiration from cult horror directors such as Dario Argento,” explained Ken.

“The majority of the content was designed for timecode playback but Ken allowed room for last minute updates during rehearsals. Consequently, I needed to be a portable design studio so I could make edits and re-designs on the fly.”

Ken noted that it was great to offer an ‘on-location’ solution for editing and animation as he was able to accommodate any requests from Nick or Tom.