Hot August Nights at an RSL near you It’s over 40 years since Neil Diamond stepped on stage at the Greek Theatre in Los Angeles with a symphony orchestra and recorded what is still known today as one of the greatest epic live albums of all time. During August this year Neil Diamond impersonator Peter Byrne recreates this show together with the 30 piece Sydney International Orchestra at an RSL near you.

Peter has the capacity to recreate Neil Diamond to a standard that apparently Neil himself has endorsed on many occasions hearing Peter’s tribute.

CX caught up with the show at Hornsby RSL on Saturday along with FOH engineer Michael Orland who has worked with Peter Byrne for close to a quarter of a century. “During that time we’ve almost come to blows, he’s screamed at me and I’ve screamed at him,” laughed Michael. “I know the word’ family’ is a bit over used in these situations but it is like that. We love and hate each other but certainly respect each other’s boundaries. Peter has come to accept that Michael Orland can be a real pain in the arse to work with because he cares about what he does.”

Michael admits that he is really precious and always abusing people but puts it down to his obsessiveness about sound.

“Maybe that’s not a bad thing when you’re dealing with things on this scale – or that’s what I like to think anyway!” he remarked. “There was one year when Peter got talked into trying someone else and at the risk of sounding like a wanker, he came back to me running with open arms. I’m sure the other guys were easier to work with as I’m always fussing and fretting which makes some people nervous.”

Michael looks forward to the month of August when Peter takes this show on the road every year. It gives him a chance to excel himself after months of doing corporate gigs with cover bands using MP3 backing tracks!

“I’ll get into the venue first thing in the morning and there’s no break until I shut up the vehicles at the end of the night,” he said. “I work my arse off but come home feeling invigorated. Its hard work but I know no one else could have pulled it off. There’s job satisfaction in being that smug!”

Most of the band were on headphones and everyone had their own personal monitor device. At Hornsby RSL one of the girls was controlling her own monitor using her iPad, another using her phone. Other key players had Behringer Powerplay controllers. Prior to this set up, the club’s audio guy would be used to run monitors and sometimes this resulted in the whole show going to hell.

“If we didn’t have the budget to fly around our own monitor guy then we needed to make everyone their own monitor person,” explained Michael. “Peter was initially nervous about it but everyone took to it like ducks to water and it solved all of our problems.”

Michael hasn’t done a gig in Hornsby RSL for fifteen years but was happy with the venue and its’ Martin line array. The club wouldn’t lose precious seats out front for a mix position so he was relegated to hugging the side wall although Michael says the club were very helpful on the day. For many years Michael toured the show with a Yamaha DM1000 but now he uses a pair of Midas M32 Cores which he loves.

“It’s a light, little one rack unit thing and if I want extra channels I use two Cores adding in extra Midas DL32 and DL16 stage boxes,” he said. “This year we’re using about 50 channels so that’s a DL36, a DL16 and two Cores which can pack into two little padded bags.”

Michael controls the show out front from a rather large touch screen having used a tablet out front during soundcheck to get the settings correct.

“The touch screen is just like using any audio console where you can use as many faders as you want,” he commented. “All the problems I used to have initially trying to run wireless where every now and then things would cut out, have been solved. I couldn’t work out how the soundchecks would be perfect and then at 8pm a message would appear on my screen saying I had lost contact with the desk. Finally, I realized that when the doors opened, 600 people with mobile phones would flood in and 2.4GHz would be unreliable. Someone suggested I use 5GHz and suddenly all my problems were solved!”

Michael was also advised to spend at least $5000 on a super router but opted for a $60 router from Kogan which he says has been great.

“It’s been a rock solid set up and a thirty second pack up at the end of the night,” he added. “No huge console to wrangle, no effects rack and no multicore to deal with. I don’t understand the old sound guys sitting around the campfire discussing how they miss the old days.”

Michael says that he has to do very little to Peter’s voice and that on most gigs he has his EQ on bypass. However as the whole show is built around Peter’s voice, Michael will tweak the overall third octave on front of house.

“Peter’s voice doesn’t need fixing, it’s not broken,” Michael reported. “If we were back in analogue-land, everything would be at 12 o’clock. There are some voices I work with where I struggle but thankfully Peters isn’t one of those. It just sounds good flat. Obviously I use a high pass at around about 120Hz but apart from that, totally flat. With the onboard effects I use Lexicon Emulation for the reverb and I only use delay as an eerie effect a couple of times during the show, there’s no normal doubling delay that sits on his voice.”

The only microphones that Michael travels with are the string bug mics and the horn clip-ons, all the other mics he picks up interstate or uses his own when performing in Sydney.

“That’s all Shure gear, ULXD and PM900 for Peter and that makes it pretty easy,” he said. “The band bring their own head phones or in-ear pieces and plug them directly into their Powerplay controllers.

Next Saturday’s gig at Wenty’s Leagues should be a corker as last time Michael was there he had trouble fitting a six-piece band on the stage let alone 35 people. He also has to vacate the auditorium for three hours in the afternoon whilst bingo takes place!! Expect to see Michael losing it and throwing furniture around the venue. 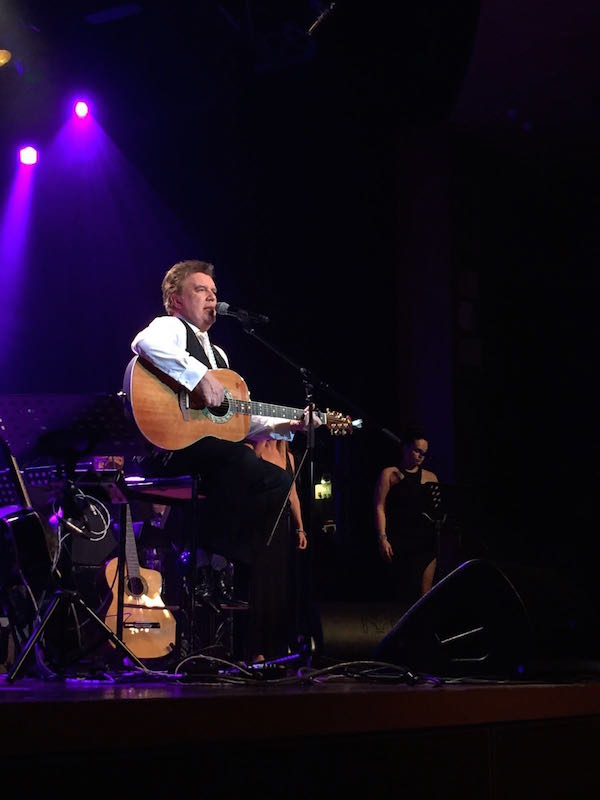