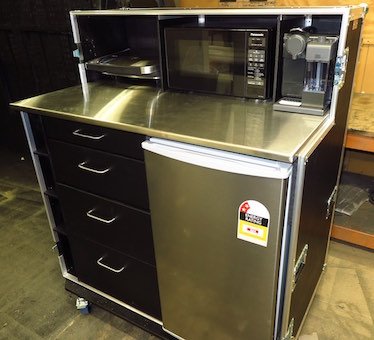 – the unsung heroes of the AV business.

Nightmare scenarios: the audio gear arrives at the show and it’s damaged. You can’t get the X!^*ing equipment out of the box. The console keeps cutting out because its overheating in the case. You can’t plug the connectors in. You can safely assume that these are not Livesound roadcases. For the last 38 years, John Carter and his business Livesound have been quietly ensuring that audio-visual gear gets from A to B as easily and as safely as possible and is fit for purpose on arrival.

John’s path to roadcase royalty began in 1980 when three guys set up a sound rental business
‘Livesound’, back in the days when they were few and far between. They ran the start-up initially alongside their day jobs at Beverley Bruce and Goldie Ltd, probably New Zealand’s oldest and most successful manufacturer of musical equipment. Not a bad place to start out.

John was employed for his cabinet-making skills, manufacturing the amplifier and speaker boxes, and it wasn’t long before John’s new business partners were leaning on him too. Paul Crowther, later of Crowther Audio started building his own mixing consoles and with roadcases virtually non-existent in both New Zealand and Australia, John found his cabinet-making skills in demand. He began by making a case for Paul, then a couple more and he started to understand the untapped business potential, “At the time I was learning by looking. Whenever an overseas band was doing a show, I’d have a look at their cases and I realised that they didn’t have many ideas either.”

“After a year or so,” recalls John, “more and more people wanted to rent our stuff, and it was wet hire, so with that and my band and making the speaker boxes and cases, I had to quit my day job.”

In an effort to improve his designs, John tapped into a global network, sharing advice and information on designing and building speaker boxes with the likes of Dave Martin, founder of Martin Audio, and Rob Lingfield, founder of Hill Audio. Mind you, ‘a global network’ back then was really a likeminded group of penfriends using snail mail.

This really started John thinking and he set off on a mission.

He left the rental business in the hands of his partners and crossed the ditch to Sydney, “I just walked into Jands and asked for a job.” The guy on the other side of the counter, Ian Johnstone (who would later run EV and Bosch Australia), explained that they weren’t hiring but they got chatting and John’s passion worked its magic.

“He said he wanted to hire me but that I’d have to wait until after the next production meeting. I waited a couple of days, got the call and started the next day.” Which was very handy, as there wasn’t a Plan B.

John spent the next eight months building speaker cabinets, “Folded horn cabinets, horn-loaded speaker boxes, all the things that were in fashion at that time. Working with the biggest rental company in Australia gave me way more insight into how boxes should be constructed, and it could all be applied to roadcases.”

John called his partners and announced his imminent return. Having successfully managed to run the company between the two of them for the last year, polite concern was expressed over exactly what John would do. “I’m going to build roadcases,” was John’s answer. By the time they picked John up, they had an order from Roland for keyboard cases, “I quickly started to look for a workshop and Roland took eight cases. I guess I haven’t had a day since without an order.”

The rental side of the business became its own entity, and John added importing, distributing and servicing to the Livesound portfolio. Since then the manufacturing side of things has seen significant changes, “Processes have obviously changed. Back in the day I’d sketch out my ideas and pick up the saw. Now we use CAD and CNC machines to cut out the parts.”

The biggest challenge though has been the Chinese breaking into the market, “We used to make smaller cases for guitars, CD players and racks but we don’t do anywhere near as many as we used to because of the cheap imports. We can’t compete on price, although quality is another matter.”

As with many businesses facing the onslaught of cheap imports, John and Livesound have focused on meeting the needs of clients who recognise quality or are after something unique or complex. “We start by thinking how easy it is going to be for the customer to utilise the case in whatever job he is trying to do and take it from there. The Chinese can’t do that.” Although he does add a “yet”.

John explains Livesound’s mindset, “We think about how people are going to get things out of the case, put it back in, how they’ll want to move the case around during pack in, how they want to store them when they are on the road. A lot goes into it.”

John and his team of four manufacturers don’t scrimp on materials, “We use thick laminate, decent quantities of aluminium for extrusions or edging, recessed latch fittings, handles that last and wheels that work.” John with Werner and Christian of K&M,
last month in Germany in 40 degree heat

Alex Oldham from Spot-Light Systems and long-time associate agrees, “Johnny knows roadcases better than anyone. You can give him a design and he’ll really think about how you are going to use something. Then he’ll politely say have you thought about this or this. He’s just got an amazing level of awareness of what is required in the business.”

Alex does buy the cheaper Chinese imports to store the equally as cheap Chinese fixtures that aren’t going to be around in a few years, “But when we want roadcases for our expensive gear we use Johnny. We’ve got cases that are 30 years old and they are still going.”

Elliot Stainton from AV Events adds quick turn around to the list of John’s attributes, “John is completely reliable. He makes cases to your exact specifications and within a tight frame.”

John’s emphasis on quality and service has and still does stand him in good stead. Whilst acknowledging that he needs the other income streams provided by the service department and the import business, there is no shortage of orders for roadcases.

Much of the business stems from word of mouth and much of it is outside the music industry. Following Sir Peter Blake’s 1989 victory in the Whitbread Cup, John made his first trophy cases, for the Whitbread Cup itself and for the numerous others Sir Peter received for walking off with line, handicap and overall honours on each of the race’s six legs. Since then he has made many a trophy case for New Zealand Rugby and most recently made four LED monitor cases for the NZ Racing Board, “All these organisations talk to each other which is great for us.”

Another angle has been cases for scientific testing equipment. They have just worked with a company who manufacture equipment to run crop analysis and needed a case to take the scales and tablet out into the fields, “They’ve just done a trade show and we’ve now a bunch of orders.” Interest in cases for drones and cameras are also increasing and can be quite complex depending on what gear they want to carry with the drone.

Even within the entertainment technology industry, requests vary. One recent project has been a roadcase for a mobile kitchen ordered by Norwest Oceania Productions for the lighting crew working on Dancing with the Stars, “They wanted a case to incorporate a fridge, Nespresso machine, microwave, toasted sandwich maker, storage and a stainless steel bench top.

“The case needed a removable front, the top needed to be partly removable to expose the bench and they needed a hinged access panel at the back for power. The closed up case needed to fit into a standard truck pack with other cases.” Jason Steel, Oceania’s Lighting Specialist, explains why they came to Livesound, “We’ve used John for many, many years for a whole range of stuff. His designs are are impeccable, and he thinks of every minor detail. Plus the end result is bullet-proof and will take whatever we throw at it.” And John delivered. The end result has a convenient footprint of 1195mm x 795mm and is currently very busy keeping the lighting crew fed and watered.

So, any regrets about getting out of the rental business, “Well, turnover dropped once I went out on my own, but only temporarily. Within twelve months it was back up again and I have never looked back. I couldn’t have imagined thirty years ago that the rugby people would say what a good idea it was to build a case for the Ranfurly Shield.”

Nor could he have imagined that he’d have a son working in the business too, “Ben’s grown up in the family business and at some point, he’ll take over the helm. He knows where its at and he’ll have his own agenda. It will be exciting to see where we go next.”