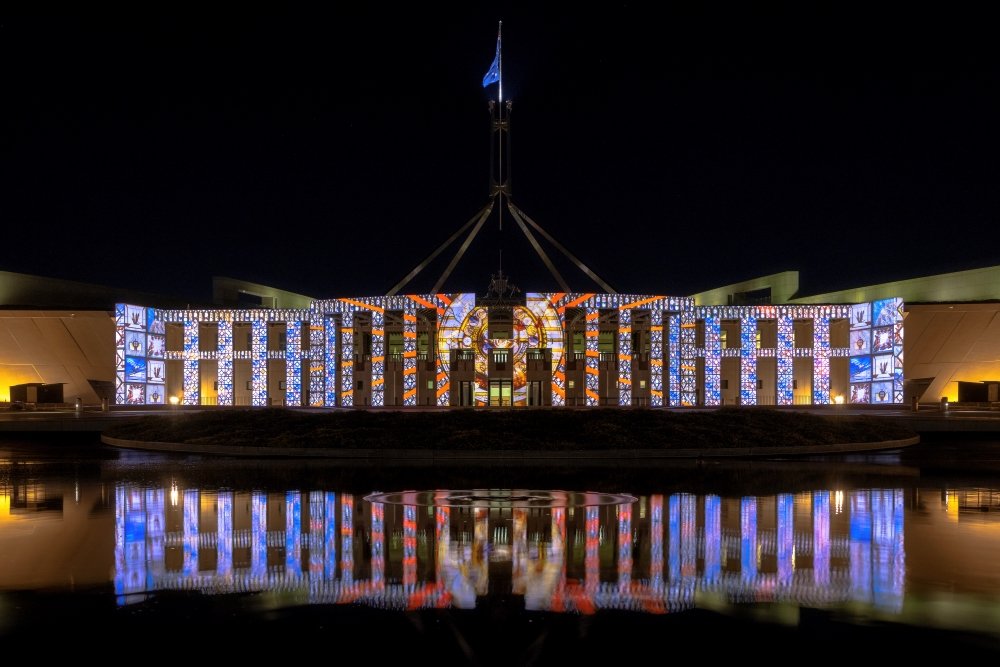 The Enlighten Festival in Canberra is one of a small number of events that managed to dodge the 2020 Covid-19 lockdown bullet.

The annual event was welcomed back with open arms for 17 days in 2021, with its extremely popular architectural projections presented from 28 February to 2 March. As it moves into its twelfth year, Enlighten continues to flourish, and has cemented itself as one of the region’s must-do annual events. From a humble 8,600 attendees over just four event nights in 2011, the festival has gone from strength to strength and has welcomed in excess of 300,000 attendees for the past four years. As a complete solution provider, The Electric Canvas is responsible for both the on-site technical delivery as well as the creative content for the projections. The company has developed a comprehensive understanding of the event’s culture, objectives and target demographic, which allows them to work closely with each attraction and institution to help them translate their creative and thematic goals into stunning animated building projections. The Electric Canvas has constantly evolved and refined its technical delivery, keeping in step with advancing projector and media server technology. Part of this evolution includes the company’s ongoing transition to lampless laser-phosphor projectors, bringing improved energy efficiencies and delivering breathtaking colour rendition.

The Electric Canvas’ creative involvement in Enlighten over the last decade has been wide ranging. The company’s in-house artists develop and produce the mapped digital sequences for each building façade in close collaboration with the attractions’ creative, marketing and curatorial teams under the purview of Enlighten’s executive producer. The institutions and attractions are always keen to make the most of Enlighten’s unique opportunity to promote their venues, core missions, initiatives and collections, and The

Electric Canvas’ experience and expertise helps them achieve those goals. TEC’s role has also included the mentoring of many external artists, assisting them to translate their style and methods into an architectural context.

Each year, the content design process begins with a kick-off briefing for each of the stakeholders, so that the opportunities, as well as the limitations, of the architecture can be fully explained. This helps to manage expectations, but also serves to stimulate new concepts for communicating the stakeholders’ desired outcomes. Much of the content is inspired by and relevant to the attractions’ exhibitions and programs, with many treatments adapted or reinterpreted from artworks or other assets from their collections. For the past three years, the National Gallery of Australia has commissioned an Australian artist to work collaboratively with The Electric Canvas’ creative team to develop a special projection mapping work for Enlighten, presented on the Gallery’s challenging brutalist façade.

This year, the National Gallery of Australia commissioned Joan Ross as the feature artist for the projections. The piece, entitled “Collector’s Paradise”, asks us to think about museums as places that keep, acquire and classify objects. The legacy of colonisation is at the heart of Joan Ross’ practice; the artist is constantly aware of the colonial influence on Australia and its complete disconnect with nature. The five-minute projection piece was accompanied by a multi-track soundscape provided by Ross, for which The Electric Canvas supplied its substantial four-way sound system, with additional discrete sub-bass effects capability, to deliver the dynamic and experiential effects needed to support some of the dramatic visual moments.

The Enlighten Festival is the only occasion throughout the year when Australian Parliament House allows projections onto its façade. This year, five treatments were developed based on a variety of themes, from portraits of the members of the first Commonwealth Parliament, to imagery derived from stained glass and glass sculpture, to a dramatic photographic work entitled, “Writing on the Wall” by Christian Thompson, as well as iridescent maireener shell necklaces from Parliament House’s Indigenous collection.

The National Library of Australia decided to celebrate the United Nation’s International Year of Fruits and Vegetables in their projections, highlighting the story of Australian produce using visual assets from their vast collections. A treatment based on Ellis Rowan’s rich illustrations of native fruits gave way to photographic imagery of orchards and vineyards, as well as harvesting and fruit canning, and culminated in a tableau comprised of colourful advertising materials and promotional graphic art. The Electric Canvas deconstructed the supplied assets to allow subtle but engaging animated adaptation of these historical scenes.

For the challenging ornate façade of the Museum of Australian Democracy at Old Parliament House, the projections were developed from messages contributed by visitors to MOAD’s exhibitions about what democracy means to them. Famous Hansard quotes (the official record of the proceedings of Parliament), visitors’ messages to “Dear Democracy”, famous song lyrics about democracy, as well as handwritten notes taken from MOAD’s “Card Castle” and “Hive Mind” visitor participation installations, were amongst the visual assets integrated into the sequence.

The National Portrait Gallery’s upcoming exhibition, “Australian Love Stories” was the inspiration behind their projections. The exhibition’s branding elements include a series of eleven simple but striking line-drawing icons, which The Electric Canvas’ artists used to create an animated sequence within a narrative style.

For the third year running, buildings across the pond on Northbourne Avenue, participated in Enlighten. Mapped projections were presented on the façades of the historic Melbourne and Sydney buildings. The city published an expression of interest for artists wishing to contribute design ideas for the projections. In consultation with The Electric Canvas, the city selected artists Mikaela Stafford and Bohie Palacek to develop artworks, which TEC’s artists then applied to the buildings’ architecture.

Despite the need for organisers to implement some stringent Covid-19 safety measures for the 2021 event, there is no doubt that Enlighten’s eleventh edition was a resounding success. As we optimistically look to 2022 and beyond, Canberrans, interstate and, hopefully, international visitors will continue to enjoy the Enlighten Festival and The Electric Canvas’ work for the foreseeable future.